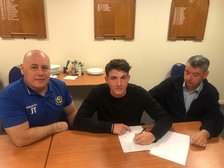 First signing for the upcoming season

Defender commits another season to the Eagles

The club are delighted to announce that Ollie Swain has tonight signed a one year contract with the club. This takes him through to May 2019.
Manager, Jon Taylor said, " I am delighted to announce the signing of Ollie Swain who was one of my best players last season . Not only did he put in consistent performances every week he was definitely one of the most improved players. From his excellent form he attracted good interest from clubs higher up the pyramid. I believe he has enough talent to step into the Football League given the chance. Hopefully the lad's perseverance, desire and commitment puts him in good stead this season to be one of my players in the ‘shop window’.Ollie has now put pen to paper and he deserves the opportunity to sign a one year contract which protects us as a Club and him as an individual."
Share via
FacebookTwitter
https://www.pitchero.com/clubs
Recent news