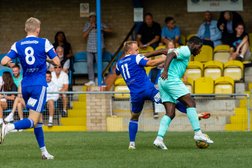 Latest on future fixtures with changes to kick off times.

The club can confirm two changes to kick off times for fixtures coming up. Our trip to Tamworth on Saturday 3rd December will now kick off at 12:30pm. This change has been made by the Southern League to avoid clashing with any potential fixture for England in the World Cup, which could take place at 3pm. For the sake of ease of planning, both clubs have agreed that this fixture will remain as a 12:30pm kick off, regardless of England's involvement in any knock out fixture or not. The Supporters Club are running coach travel to this game at Tamworth, and details of this will be confirmed in the coming week.

Our first fixture of 2023 will now kick off at 1pm. We visit Royston Town on Monday 2nd January, and both clubs have agreed to bring this fixture forward by a couple of hours to kick off at 1pm.

Finally, supporters are also reminded that our postponed trip to Redditch United, which was due to take place on Saturday 19th November, will now take place on Monday 9th January 2023, kicking off at 7:45pm.