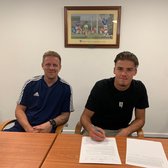 Bedford Town Football Club are delighted to announce that Drew Richardson has signed a contract with the club. The exciting midfielder joined the Eagles in the summer, having been with Luton Town throughout his youth and last season at Biggleswade Town.

Richardson has impressed during preseason, and this has earned him a contract. We're also delighted to confirm that this agreement has been reached as a two year deal, meaning Drew will remain at the Eyrie until the end of the 2021/22 season.

Speaking to www.bedfordeagles.net, owner Jon Taylor said "I'm delighted that Drew has committed himself to the Eagles for the next two seasons. He is a player that we have admired for a long time. Drew is an exciting player, one that will bring energy and excitement to the side. Along with Connor (Tomlinson) we have secured a real prospect for the future."

Sponsorship of Drew is now available. You can now sponsor him, or any other available player, via the club's player sponsorship scheme. Please contact Martyn on 07841 762813 or commercial@bedfordeagles.net for more information. Sales are going well, so please contact them to secure your favourite player before someone else does!