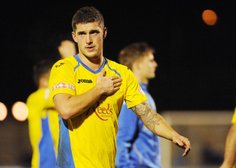 Bedford Town Football Club is delighted to announce that we have agreed a deal to bring Ross Watson to the club.

Ross is a 31 year old central defender, who has previously been with Stamford, and was part of the successful sides at Spalding and Kings Lynn over the last decade, making over 180 appearances for the Linnetts between 2010 and 2016. Since leaving the Walks, Ross has been with Yaxley FC and played in their win over the Eagles three weeks ago.

Speaking to www.bedfordeagles.net, manager Mark Ducket stated "I'm delighted we've managed to convince Ross to come over and join us at the club. He is an experienced central defender that I have long since admired. He will add valuable and much needed experience to the spine of our team."

He is in the process of completing a transfer and will be available for selection at the end of February.