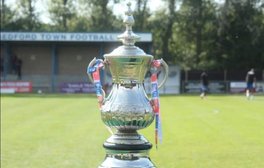 Eagles downed in the FA Cup

The Emirates FA Cup came to town on Saturday as the Eagles entered and exited the competition at the preliminary round.
A single goal from a determined Deeping Rangers meant it’ll be its only visit to the Bright Management Eyrie Stadium this season.
After Tuesday’s loss in the League the management made changes in the team, Gavin Hoyte and Damien Green were back in defence and Nathan Olukanmi and Tre Mitford were also given their first starts of the season.

With temperatures approaching 30 degrees the teams kicked off and shared chances in the first period of play.

Bedford’s first meaningful chance came after the first half drink break when Deeping Keeper Lewis Elsom came out of his goal and fluffed a kick. Bedford were unable to immediately capitalise, but with Elsom now back in goal Mitford blasted a shot which came of the underside of the bar, before Connor Tomlinson had an attempt blocked. Ebby Nelson-Addy and Ben Ford had chances go wide of the post, while Mitford had a last minute effort saved. At the other end Arron Dillon was called to save chances but neither side were to find the elusive goal in the first half.

After the break Deeping were the first with a chance when they took advantage of some poor Bedford play. Dillon was able to stop Jordan MacCleod’s shot with his legs, while Charlie Coulsdon had his shot blocked.

The visitors were now getting more chances in the game, Dillon was forced to make a save from Dan Jarvis, while corners were defended.
Connor Tomlinson had a chance for the Eagles when he latched onto a Dillon clearence, he sidestepped his marker and fired from an angle, but his shot was too high. Tomlinson has another opportunity when he met an Olukamni corner, but his sliding shot was palmed away by Elsom.

Bedford were first to make a change, bringing on Callum Donnelly to replace Olukanmi. Shortly after the decisive moment of the game came. Nelson-Addy went down in the Deeping penalty area, but the referee waved on. The visitors launched the ball forward to Jordan MacCleod who ran onto it and beat Dillon with a low shot from the edge of the area.

With Bedford a goal down and less than thirty minutes remaining, they were forced to go more offensive. Dan Walker had a shot as he received the ball on the left, evaded two players and fired from twenty yards, the effort clearing the bar.

Manny Soetan, making his first competitive appearance for the Eagles and Abraham Eze were brought on to give the home side more attacking options, replacing Nelson-Addy and Tomlinson. The visitors also making two changes.

Bedford still battled for an equaliser, Walker put on a good cross to Soetan in the final minutes of the game, but his header went over the bar.
Eze had the final attempt of the match, but his shot also cleared the crossbar.

It wasn't to be Bedford Town's day and we now move forward to Bank Holiday Monday's match against Corby, while wishing Deeping Rangers the best of luck in the next round.