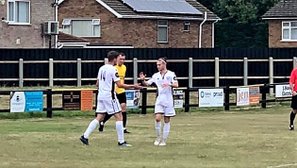 Second half flourish secures the win.

Bedford Town travelled into Cambridgeshire for their first away friendly of the campaign. As with other preseason matches, this match was held behind closed doors with only essential non playing personnel allowed into the ground.

Manager Mark Ducket named a strong starting line-up, with trialists and youth players earning their place on the bench.

Most of the action was saved for the second half, but Connor Tomlinson did get the ball in the back of the net, with minutes remaining of the first half, only for the assistant's flag to be raised.

Obviously boosted by his first half effort, Tomlinson hit the net again early in the second half. He managed to round the keeper to slot the ball into the empty net. He got his brace after substitute Dan Walker squared to him, allowing him a tap in.

Not to be outdone, Walker scored himself to put the result beyond doubt.

Three matches in, a first clean sheet, and results starting to go the Eagles way, in what are still the early days of a long preseason.