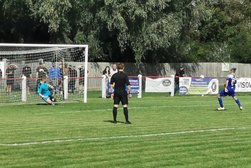 Kempston fail to hold on to an early lead.

The Harry Robinson Trophy traditionally contested between Bedford and Kempston's biggest teams, saw it return to the Eagles after a well contested match at the Hillgrounds Leisure ground.

The match started well for the home side who took the lead in the fourteenth minute, before things equalised eight minutes later after Matt Harriot was brought down in the box and Connor Tomlinson scored the resulting penalty {pictured}.

Bedford's winner came in the thirty seventh minute as Will Summerfield's corner was fluffed by the keeper allowing it to fall to the boot of Drew Richardson who happily put it away.

The second half saw various substitutes for both sides - some forced, but there were to be no more goals, meaning the Harry Robinson Trophy once more returned to The Eyrie.