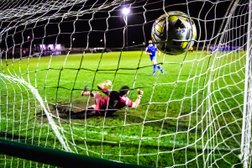 Eagles squeeze past Stotfold on Penalties

The Eagles won on penalties against a strong Stotfold side after a draw in ninety minutes. The winning penalty was scored by Connor Tomlinson to send the Eagles to the next round of the Beds Senior Cup.

The Eagles squeezed past Stotfold in the Beds Senior Cup thanks to a penalty shoot-out win. The Eagles shouldn’t have needed penalties to win the match but a fantastic goalkeeping performance from Liam Gooch kept the score to 1-1.

The Eagles got off to a terrible start in the match as Stotfold scored within two minutes of kickoff. This was after a ball to the left wing where Codi-Lee Spavins received the ball. He ran through towards the goal and calmly slotted past emergency goalkeeper Lewis Elsom to put the Fold ahead.

Bedford Town responded well to this with some great chances. Craig Mackail Smith attempted to lob the goalkeeper, but Liam Gooch tipped it past the post. Mackail Smith had another great chance when Charley Sanders crossed the ball in, and Mackail Smith’s header was well saved by Gooch.

Just before the break, Bedford won a penalty. This penalty was won thanks to Craig Mackail Smith who was clearly fouled inside the box. Charley Sanders took the penalty and scored to put the Eagles back level. The half time score was 1-1.

The Eagles looked as if they would win the match in the second half with plenty of great chances coming and going. One of the best of the second half was when Connor Tomlinson dribbled past some Stotfold defenders, and his shot then hit the post.

In the last ten minutes, Bedford were throwing everything at Stotfold. The best chance was for Charley Sanders when his header hit the post. Stotfold held on and the game went to penalties.

The first two penalties were scored for each team before Stotfold missed their third penalty. Charley Sanders scored the next penalty to give the Eagles the advantage. The last penalty was for Connor Tomlinson to take, and he scored to send the Eagles through.

This penalty shoutout marked a solid win for the Eagles against a tough to beat Stotfold side as Bedford Town advanced to the next round of the Beds Senior Cup. A big congratulations to Callum Donnelly who made his 150th appearance with Bedford Town!