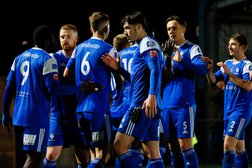 Eagles beaten on the line in seven goal thriller

The Eagles were beaten 3-4 at home against Bromsgrove in a thrilling match. A late comeback from Bromsgrove sealed the points in a tough loss to take for the Eagles

It was time for a big match at The Eyrie as Bedford Town welcomed Bromsgrove Sporting. Bedford beat Kings Langley 2-0 in midweek and were looking to continue this form into this match.

It was an even start to the match but in the eleventh minute, Bromsgrove took the lead. This was after a corner was whipped in and defender Michael McGrath flicked it into the top right corner with a brilliant header to give Bromsgrove an important lead.

It wasn’t long until the Eagles got an equaliser. This came from a Bedford corner which was half-cleared to the edge of the box where Diadier Camara released a cracking shot which was deflected into the back of the net to level the score.

The Eagles didn’t hold onto this for long as Bromsgrove went back ahead minutes later. This was after Ahmad Dyer beat Jack Keeble on the left wing and got the ball into Dan Sweeney in the box. He pivoted past a few defenders and finished into the bottom right corner to restore Bromsgrove’s lead.

Bromsgrove had another good chance when Dan Sweeney was played in and Aymen Azaze collected well. Sporting should have got a third before half time when a pass back to Aymen Azaze bobbled causing Azaze to miskick it. Vladimiro Pals headed it wide to the relief of Azaze. The half time score was 1-2.

The second half was an aggressive one. There were three bookings at one point after a foul on Callum Donnelly. This seemed to pump some momentum into the Bedford Team.

With just over fifteen minutes to play, the Eagles won a penalty. This was after Kai Phelan was tackled down in the penalty area and the referee pointed to the spot. Connor Tomlinson stepped up and scored, sending the goalkeeper the wrong way.

Bedford now had a spring in their step as they went ahead three minutes later. This came from a brilliant corner crossed into the box and Jack Keeble headed home to put the Eagles ahead for the first time in the match. A very good way to mark your first Eagles goal.

The game wasn’t over yet as Bromsgrove equalised. This came after a long ball to the right-hand side where Dan Sweeney ran onto it and cut into the box and smashed the ball home to level the game.

Bromsgrove weren’t finished there as they went and another goal. This came from a long ball over to Dan Sweeney who ran through on goal and slotted the ball past Aymen Azaze to make it 4-3. The linesman was ten yards off the back line and didn't call the obvious offside. This was it for the match and Bromsgrove won 3-4.

A disappointing defeat for Gary Setchell’s side, who should have got a point out of the match as the Bromsgrove winner should have been called offside. Next week we are away to Tamworth. A reminder that that game is a 12:30 kick off.