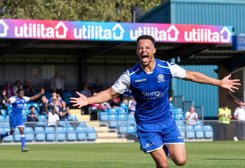 Eagles open season with a win

Away wins on the opening day are fine for Bedford Town, but there was a 19 season gap to secure a victory at the Bright Management Eyrie at the start of the campaign.
Saturday’s win needed a late goal to secure the points, but it was deserved for the Eagles in a frenetic match that had few champagne moments, as the side overcame Thame United 2-1. Last season’s top scorer, Dan Walker, opened the goal account for Bedford just past the midway point of the first half, and although Thame equalised a few minutes before the break, substitute, Tre Mitford popped up to give Bedford the win with just six minutes remaining.
The starting line up was a bit of old and new, with six players making their senior debut
Bedford were up and at their opponents from the start, and just 30 seconds in, Ebby Nelson-Addy forced a corner as his shot deflected off Matt Peake-Pijnen. The corner didn’t produce an early goal, and neither did the Thame corner at the other end a few minutes later, when Cade Stephens-Abbey cleared away from goal.
Dan Walker was keeping the visiting defence on their toes, and his first effort of the day went just past the left hand post after he had evaded Peake-Pijnen. The Eagles immediately kept up the pressure from the goal kick, and after the ball was played down the right, Scott Joseph played the ball to the far post, but it was still a bit too high, and Walker couldn’t put his header on target.
Craig Hill, in the Thame goal, seemed to like coming out of his area, and nearly cost his side when he raced out to confront Walker, who had ran onto a pass down the left. The ball got tangled between both players legs, and fortunately for Hill, was able to put the ball out for a throw to allow himself to scuttle back into goal.
The Eagles opened the scoring in the 28th minute, and a sublime pass from Nelson-Addy, through the defence, found Walker reacting the fastest, and he took the ball on and slotted it past the advancing Hill, and inside the near (right) post.
A few minutes on, a half clearance from a corner helped Stephens-Abbey to set up a scorching shot from 22 yards that sailed over the bar.
Bedford’s lead lasted just ten minutes, and the defence seemed to go to sleep when Dan West crossed over from the left to Duran Martin, and with no one around him, Martin executed a powerful header to put the ball past the exposed Aaron Dillon.
Just before the break, Hill produced another Comedy Of Errors, when his desire to become an outfield player resulted in Scott Joseph pulling the ball away from him. With two defenders between Joseph and the goal, he tamely put the ball towards the first one, and the danger was averted.
Jejune would be an appropriate word for the 2nd half, and there were also moments of drama.
Already in the book from the first 45 minutes, Derek Ubah provided a perfect sliding tackle to deny Gregory Hackett a go at goal. An inch either way, and Ubah could have been looking at a second yellow card.
A niggling edge crept into the game, as Connor Tomlinson was booked for a foul on Hackett, while a minute or so later the roles were reversed, with the Thame player only getting a ‘talking to’ for a tackle that may have been interpreted as a two-footer. Stephens-Abbey and David Lynn were also verbally cautioned after they came together in dispute over a tackle.
Just after the hour, Dillon was called upon to deny the visitors, when he saved a pile driver from Martin. The rebounding ball went to West, but Dillon had raced over to save the resulting header as well.
From a Thame corner, the ball was cleared out to Walker on the left wing. As he sped over the halfway line, leaving a trail of players, Harrison Mepham came across to illegally stop him in his tracks, and was rewarded with only a yellow card.
Time was marching on, and it looked like the game would end 1-1, even in the 76th minute when Ben Ford set up Tre Mitford, and from ten yards, the striking substitute snatched the ball as a defender was about to tackle, and saw it go out for a goal kick.
Mitford then showed how it was done when he scored the winner in the 84th minute. Nathan Olukamni pushed the ball to the right corner for Walker, who in turn took the ball along the byline and put a cross into the area that Mitford received to side foot the ball into the net.
On the cusp of the 90 minutes, Olukamni, on the right corner of the area, saw his curled shot beat Hill, only to see it graze off the crossbar.
Into stoppage time, and Hill kept up his antics by racing upfield to add an extra man for a free kick.
The whistle went and Bedford had won an opening day game at home for the first time since 2000. Their opponents that day? Thame United.
Share via
FacebookTwitter
https://www.pitchero.com/clubs
Recent news