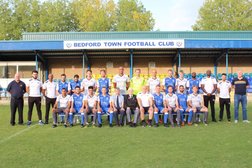 Bedford were given a lesson in finishing on Tuesday evening, after losing 4-0 at Berkhamsted.
One change was made from the side that beat Thame on the Saturday, with Ben Ford coming in for the unavailable Joe Steele.
Three goals in the first half made it virtually impossible for Bedford, but the side kept plugging away against a defence that looked a little to comfortable.
The Eagles gifted Berkhamsted the opening goal of the game when Jonathan Lacey made room on the left wing to put in a cross to the near post, and Lewis Toomey stole in to direct the ball past Aaron Dillon, with three Bedford defenders looking on.
Three minutes later, the home side had doubled their lead when a 22 yard free kick, in a central position saw Lacey bypass the wall and score via the outstretched and diving hand of Dillon and the post.
The Eagles had a similar free kick a couple of minutes later, as Ben Ford hit the bar, but the ball had enough spin on it to bounce out for a goal kick.
The partnership of Lacey and Toomey was giving the defence a load of problems, and just past the midway mark, Toomey’s dummy set up Lacey on the edge of the area, and Dillon had to be alert to dive to his left and palm the ball round the post when the shot came in.
Five minutes later, and Toomey’s volley from 20 yards forced Dillon to dive to his right to save.
It wasn’t all one way, but the defence seemed to have the measure of Bedford, with the two central defenders winning everything in the air.
With five minutes of the half left, a Berkhamsted defender put his body in the way when Connor Tomlinson turned and shot inside the area. Bedford kept up the pressure, and Xavier Comas Leon was finally brought into action when Ebby Nelson-Addy sidefooted the ball towards goal, but it was a tame effort.
Berkhamsted added a third with three minutes of the half left. A free kick from the left of the area evaded everybody including Dillon, came off the post, and before anyone could react, Max Farrelly slid in to put the ball over the line.
Straight after the goal Nelson-Addy tried from 25 yards and Comas Leon had to get down smartish to save.
Bedford made two changes at half time, bringing on Saturday’s match winner, Tre Mitford and Nathan Olukamni for Scott Joseph, and it seemed to liven the side up, as Bedford had to take the game to their hosts.
The Eagles had plenty of possession, but no final ball came. Berkhamsted were content to defend their lead and counter. One instance saw Toomey race onto a long ball from defence, and flash the ball just wide of the mark.
Bedford succumbed to the countering in the 69th minute to give away a fourth goal, when Jonathan Lacey latched onto a drop ball, took the ball to the left byline, and beat Dillon from a tight angle.
Bedford kept plugging away, but came up against a well drilled defence.
In stoppage time, Lacey put in a hopeful shot that Dillon spilled, but was able to collect.
The Eagles are in FA Cup action on Saturday, as Deeping Rangers of the United Counties League visit the Eyrie for a preliminary round tie, and on Bank Holiday Monday, Bedford entertain Corby. Both games are 3pm kick off
Share via
FacebookTwitter
https://www.pitchero.com/clubs
Recent news