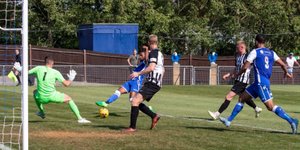 Eagles steal a point from Corby

Second half comeback ensures the points are shared

After defeats, in the League and the Emirates FA Cup, the Eagles may have preferred opposition other than Corby Town for their next League outing.

Like Bedford the Steelmen are one of the teams hoping to gain promotion this campaign, and after today's performances, it looks likely that both will be in with a shout.

With temperatures well into the 30's the teams set out with positive attacking football. Bedford's defender Damien Green feeling the result of a clash early on which laid him out for a while.

Both sides had chances early on, but it was the visitors that made it count when Joe Burgess was given space at the edge of the area and drilled home past Eagles keeper Aaron Dillon.

A rare error from Daniel George in the Corby goal gave Bedford one of their better early chances. He came out to claim the ball and with no Eagle within five yards, but he let it go through his hands and out for a corner. The corner resulted in a George clearance.

Bedford were looking more positive in this match than they had in the previous two and were producing some good chances, but it was still the visitors that found the net again when Elliot Sandy unleashed a superb forward ball to Jordan Crawford on the left wing. He beat Cade Stephens-Abbey, cut inside and unleashed a vicious effort past Dillon.

Bedford were forced to make a change close to half time when Stevens-Abbey limped off.

Gavin Hoyte replaced him and having three burly centre backs in the back four seemed to strengthen the defences which were to keep the visitors out of the home goal for the rest of the game.

The second half started with Bedford on the offensive and Corby happy to sit back and defend their two goal lead. Scott Joseph had a chance, but the referee pulled the attack back for a push.

With around thirty minutes remaining Jon Taylor made his second substitution, with Tre Mitford coming on for Joseph.

Ten minutes later Bedford had their first goal. An Eagles free kick was easily cleared after Ben Fords delivery, however, the ball was worked back into the box and Mitford's one touch finish was too good for George.

The goal was the inspiration the home team needed as they saw the opportunity for more. Taylor added more pace into the attack bringing on young striker Connor Tomlinson to replace Manny Soetan with just fifteen minutes remaining.

With nine minutes left Mitford made it two as he pivoted in the box and smashed the ball home, giving George no chance.

Corby were forced to respond to Bedford's equaliser but the scores remained equal.