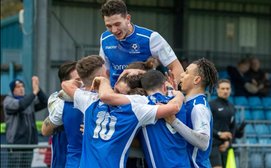 Eagles back in a play off position

Manager Nathan Abbey made one major change for this match, with new keeper Connor Coulson given the nod over Aaron Dillon.

The match started with Bedford edging the chances, upfront Tom Hitchcock, Dan Walker and Connor Tomlinson combined well to enable a Tomlinson strike early on, which was blocked by a defender.

Mid way through the half Tomlinson had another shot from 22 yards out, but the ball went over the bar after being fumbled by Daventry's shot stopper Brad Lashley.

Soon after the Eagles got their breakthrough as Hitchcock, already Bedford's top scorer this season, found the net again.

Ben Ford played in the free kick to the top right hand corner, and Lashley made a diving save, but couldn't hold onto the ball. Hitchcock was first to react and beat everyone to the ball to lash it into the net. (31' BT 1-0 DT)

Early in the second half Cade Stevens-Abbey was replaced by Nathan Olukumni, who gave added pace on the wing. Later Drew Phillips came on for Hitchcock upfront.

Centre back Ollie Swaine had a chance from a corner, but his header went over the bar.

Shortly after Nathan Abbey made his final and what would be decisive substitution, with Jack Vasey replacing Tomlinson.

With six minutes remaining Daventry's persistence paid off as they got their equaliser. A corner and a goalmouth scramble ensued which enabled Kyle Barnett to flick the ball into the net. (84' BT 1-1 DT)

With minutes left it looked as though Daventry had got their point, but Vasey had other ideas. With two minutes remaining a cross came in from the right where the ball dropped in the area, just right for Vasey who entered the area to side foot the ball into the bottom right hand corner of the net. (88' BT 2-1 DT)

Bedford held on for the win which saw them back into the play off places.