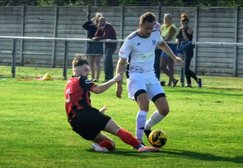 Losing at Thame United is becoming a bit of a trend for The Eagles, and their opening game in the Pitching In Southern League Division One Central was to be no exception.

Things started well for the visitors, who dominated the game for the first part, until a moment of madness from Matt Harriot saw him given his marching orders after retaliating to a Thame players hard tackle.

Being a man down put Bedford under pressure and enabled the home team to build some momentum. This culminated in a penalty awarded, and scored, against Drew Richardson who was deemed to have hand balled whilst challenging for a cross.

Things went from bad to worse at the start of the second period as Thame used their man advantage to get a second goal. The advantage became two man with twenty minutes remaining as Ross Watson received a red card for a second bookable offence and was duly despatched to join Harriot in the changing rooms.

The entry of Jake Newman and Rene Howe wasn't enough to change the game, although Newman came close to scoring, getting the ball and keeper in the back of the net.

Six minutes into added time Thame got their third, enough to take them to third place in the opening table, while Bedford languish near the bottom.

The Eagles don't have another League match until Tuesday 29th September, when Berkhamsted visit the Eyrie, but before that on Tuesday 22nd, National South team Hemel Hempstead visit for one of their last preseason friendlies.