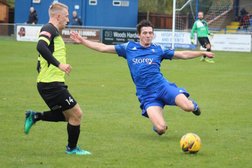 An entertaining game of football where the 334 fans, who braved the weather had to wait until the final minutes to see any goals. On a wet but very playable pitch the sides battled it out, with both teams having early chances.

Then came the game changing moment half an hour in when Bedford's Matt Sparrow was judged to have fouled Nathan Tshikuna and was shown the red card. Many in the crowd seemed to think a yellow at the most would be more appropriate, but again it meant the Eagles had to play the majority of the match with ten men.

Chances came and went but it remained goalless at half time.

For the second period, Brett Longdon was replaced by Tom Hitchcock, with Drew Richardson moving back into defence. Ten man Bedford maintained their share of possession throughout the game but it was Victor Osubu that scored for Barton with just six minutes remaining. His shot from the edge of the area, hit the right hand post and went in.

Not giving up, with two minutes remaining Rene Howe came on to replace Dan Walker, but it was Captain Fantastic Ross Watson , who was to set the Eyrie alight with his stoppage time equaliser, as new Assistant Manager Darren Eady Tweeted after the match "it felt like a win".