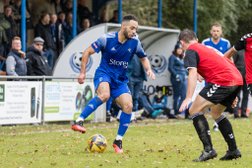 Eagles soar with defeat of Millers

Convincing scoreline that suggests Bedford are back in business.

Bedford Town welcomed their largest gate of the season to the Eyrie as their form continued to improve. In the line up for this match were new signings Charley Sanders who started the match and Danny Setchell who occupied a place on the bench. Also starting was Matt Harriot, having served his three match suspension.

Our opponents have seen a tough start to the season with opening matches against Berkhamstead, Thame and Halesowen before their trip to Bedford, yet three points at the Eyrie would have seen them in a similar position in the table to the home team. As it was the home fans had nothing to fear as this was the match where the Eagles produced the sort of display that had been suggested in recent performances.

Early on in the match North Leigh probably had their best chance of the game as the ball was headed goal bound from a corner, only for Rene Howe to be on the line defending and making a clearance. The Millers continued to have the early chances, but the Eagles new look defence survived the early onslaught and found the net first courtesy of Craig Mackail-Smith midway through the half.

Four minutes later the lead was doubled as a free kick went to Harriot, who found himself in open space, enabling him to take the ball to the edge of the area and slot it home in the bottom left of the net.

Howe was having his best game since re-joining the club, and could have scored twice in the next few minutes, heading a ball from Captain Ross Watson just wide, before a half volley also went the wrong side of the post moments later.

With ten minutes of the half remaining Drew Richardson had a long range shot parried away by the Millers keeper, which went to the by-line to be picked up by Will Summerfield, his cross was intercepted by a defender, who put it out for a corner which came to nothing.

In added time North Leigh had another chance as striker John Mills had a shot saved by Jamie Greygoose from ten yards out. Ten minutes into the second half, he did beat Greygoose, only for the shot to rebound off the post into the path of the Millers George Seacole, his shot came to nothing, being blocked by Dan Walker's posterior.

The third goal came approaching midway in the second period, when Sanders diverted a shot into the net, scoring on his debut, to add to his two goal tally this season from when he played as a striker for his previous club Yaxley. Before the celebrations had ended though, North Leigh grabbed one back, Mills finally getting his goal, which by this time was little more than a consultation.

Bedford weren't done yet though, and it fell to Howe to make absolutely sure of the result. Substitute Connor Tomlinson had made a typical mazy run down the left before his shot came off a defender into the path of Howe, who turned and fired the ball into the back of the net from close range.

The win sees the Eagles climb four places in the table to 7th - a week ago we were 19th.