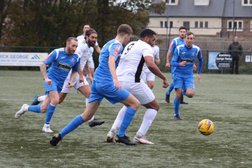 Goal enough to separate the sides

The Eagles visited Yaxley knowing that a win was needed to keep pace with the leagues front runners, but faced not only the clubs 3G pitch, but gale-force winds, which combined to affect play for the visitors. With two former Peterborough United front men in our starting line up, and three former Cuckoo's in the squad the home team were well up for the challenge, but were undone by fantastic Connor Tomlinson goal.

The first half passed with few incidents of note, both sides had chances, but Bedford were increasingly on the ascendancy and getting the most chances, including efforts from Rene Howe and recent signing from Yaxley Charley Sanders, but the goal didn't come as Finlay Irons kept out any efforts that got past the defence.

With the wind against them in the second half the Bedford defence would need to hold firm, and that may have been part of the reason that Gary Setchell made his first substitution at the start of the half, replacing Will Summerfield with Drew Richardson.

Craig Mackail-Smiths lay off to Rob Sinclair could have seen the Eagles take the lead in the opening seconds of the half, but again the keeper was up to keeping it out. Five minutes later and it was Ollie Swain who had a shot stopped as Danny Setchells free kick was headed by Ross Watson into his path.

With Danny Setchell struggling with a knock Connor Tomlinson came on to replace him, and that was to be the game changing moment as with his first touch of the ball he fired a volley into the top right corner of the net, giving Finley no chance. With the clean sheet gone, Yaxley were now forced to come out and attack more, which gave the visitors more chances, including Dan Walker, who, after a great run put his shot just wide of the post.

The Cuckoo's best chance of an equaliser came in the last minute of normal time when Liam Hook fired off a great 20 yard piledriver of a shot that produced a superb save from Jamie Greygoose as he dived and palmed the ball away.

Before the match the manager said the game wouldn't be a classic, and he was right, but the team did what they needed to. The defence held firm with another clean sheet and Tomlinson popped up with a fantastic goal just when it was needed. With several other results going our way, we could be in a position to go top when we travel to current leaders Aylesbury United on Wednesday night.