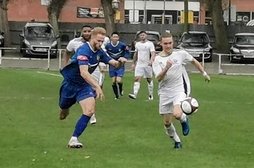 Tulips wilt as eagles turn up the heat

Rene goal enough to see off the home side

Bedford's second forray into a cup competition this season ended more successfully than the first, but the team is looking far stronger now than that fateful first match of the season when we exited the FA Cup.

Spalding's ground is quite rare in that it enjoys a town centre location, maybe that's why the playing surface more resembled a Sunday league park pitch than a team who are at the equivalent level to Bedford in the league structure.

For his fifth match in charge manager Gary Setchell made the changes for this second qualifying round FA Trophy match. Josh Hill made his debut in goal, Ollie Swain got a recall in defence allowing Drew Richardson and Will Summerfield to move forward in a more attacking role. Danny Setchell also made his first start with Connor Tomlinson getting the nod upfront to partner Rene Howe. Craig Mackail-Smith, Rob Sinclair and Matt Harriot were amongst those starting on the bench.

The match itself was a scrappy affair with some tough play at times, hard challenges and a handful of yellow cards between the teams. The visitors had their first chance a couple of minutes in as a Summerfield free kick was punched out by the keeper taking Ross Watson with it. Moments later another Summerfield free kick cleared the left hand post. Spalding also had their chances - Cameron Johnson saw a shot rebound off Charley Sanders, which he was then able to square, but the play was intercepted by the Bedford defence. Five minutes later Johnson went down clutching his face after a challenge from Watson, the ref had a word, but took no action.

Richardson playing in a more midfield position enabled him to get in more attacking positions a cross from the by-line made its way to Summerfield, but his shot was blocked by the home defence. Half an hour in after winning the ball in midfield, and instigating an attack for Bedford, Howe put in a lovely pass to Tomlinson who just cleared the bar with his first touch shot. Moments later Tomlinson had another chance, this time heading over a Dan Walker cross.

Further chances came at each end before, in the 39th minute what was to be the match winning movement happened. The ball was pushed out from the left to Summerfield who crossed into the path of Howe who slotted it home from five yards out.

The second half, as the first, continued to be a tetchy affair with the home team trying some unorthodox tactics to find the elusive equaliser. Midway through the half a corner from Bedford was caught by Michael Duggan in the Tulips goal, who rushed out to the edge of the area flattening Charley Sanders in the process. The altercation that followed saw Duggan and Howe getting booked while Sanders received treatment.

Soon after Spalding's No 9 Joel Brownhill went down down clutching his face. The referee stopped play, but sent the player to the dugout for treatment from where he ended up in the book as he continued to remonstrate with the official.

With fifteen minutes remaining, Bedford made the changes. First they introduced Tom Hitchcock and then Craig Mackail-Smith, replacing Howe and Tomlinson. Mackail-Smiths entrance saw more chances for the visitors, with three minutes on the clock he tried an ovehead kick, which didn't go right but set Watson up for an attempt. If he had kept the ball down it would have been a goal, but instead he launched it over the bar from close range.

Deep into injury time and the visitors were still trying for another goal, first a Walker cross was weaved into the area by Mackail-Smith, he shot low, but the shot went just wide of the post. Then it was his chance to turn supplier as from a freekick he headed the ball into the path of Hitchcock who chipped the ball over the keeper, and the goal post.

The narrow score line was enough to see us into the third qualifying round which takes place on Saturday 31st October, meaning that Bedford's Pitching In Southern League Division One Central home tie against Kempston Rovers is postponed.