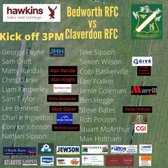 Bedworth RFC team for this weekend

We start off with apologies we have no Bedworth Bears game this weekend. Due to injuries, unavailability’s and holidays we just didn’t have enough to make two teams this weekend. It is unfortunate but we hope going forward we will be able to get players back and having two teams more regularly.

Looking ahead to the first team league game the squad has been announced. Bedworth RFC are at home where we welcome Claverdon RFC for this midlands 4 west (south) league fixture. Big game as both teams are currently unbeaten and this week will be another push towards promotion from the winner. Bedworth RFC players have looked good in training and look up for this fixture.

The meet is 1:30pm for the players with shirt and ties for after the game. Fines will be issued to any player late or not wearing shirt and ties. The club will be open from 1pm if supporters want some early drinks before the game.

We are hoping for good turnout and plenty of support to help cheer the Bedworth boys on to hopefully another good win. Good luck all involved. Let’s keep this winning momentum going. #UTB #BedworthRFC #BedvsClav.