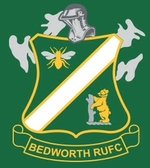 Bedworth RFC made the trip to Droitwich in hope of securing their first points of the season; after a positive weeks training saw another 2 players join the club and some key issues ironed out.

After a away loss to Woodrush last week everyone was keen to push on and improve on the areas that had failed them the week prior.

Unfortunately it didn't go to plan as 2 players pulled out of the squad and were not replaced; whilst another was injured in the warm up. Despite being injured the player gallantly continued and struggled through the 80 minutes; as Bedworth were forced to play without any substitutes and carrying a injured player.

The day didn't get any better from here on; the hosts took control of the game early on and dominating throughout to secure an easy home win alongside the bonus point.

The only positive to take from an otherwise tough day for all involved was the 2 tries scored against a well drilled and high competitive team.

With the season not starting the way the coaches and players had hoped it's back to the drawing board this week at training, with no game Saturday it provides a chance for Brendan Evans and his coaching team to re-evaluate strategy and selection for the first home game of the season.

Reflecting after the game Evans said "It was a tough one for all involved, they were a well drilled, competitive and strong team; on another day without cry offs and injuries it could have been different".

Club Captain Lee Bennett also added "The games gone and we need to put it to the back of our mind, with plenty of games to go we need to step up to the challenges put in front of us".

Bedworth 1st XV have a week off this coming, the 2nds have a cup game which no doubt they'd like to see some familiar faces turning out to support.