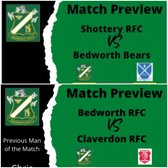 Looking ahead to this weekend

We take a look ahead to Saturday 23rd October where Bedworth RFC are hoping to put out two teams. We will take a look first at the first team.

Bedworth RFC are in midlands 4 west (south) league action at home against Claverdon RFC. Kick-off is scheduled for 3pm. Bedworth RFC find themselves in 3rd place with two wins from two. Claverdon are also so far unbeaten this season in the league where they have played one more game then Bedworth and find themselves in 2nd place with 3 wins from 3. This will look to be a very physical game with both teams not wanting to lose and keep their 100% record going.

Claverdon have always been a very strong well drilled side and the games have been well contested in the past between both teams. This week’s game can expect more of the same with Bedworth hopefully having the home side edge. All support will be welcome to cheer the lads on to hopefully help towards another win.
More information will be going out on player meet times and club opening time later in the week.

We now take a look at Bedworth Bears which will see a mix of 2nd team and vets players hopefully playing. This game is away to Shottery RFC with 3pm kick off scheduled. Bedworth Extras are also unbeaten so far this season and will be hoping to keep 100% record going for the whole club. Shottery are a very good side and find themselves 4th in Warwickshire league 3, played 3 won 2 and drew 1. The extras are currently 2nd, played 2 won 2 with a home win awarded on one other game. This will be another game where both teams will be giving their all and not want to slip up. Shottery will have home advantage so will be tough game for the Bedworth Bears.

Training Tuesday and Thursday will be important and will need good numbers to ensure we can keep those wins coming. More players are still needed if we are to fulfil both fixtures for this weekend so if you haven’t made yourself available please let the coaches know ASAP. Let’s make the effort and make it another big successful weekend for Bedworth RFC. #UTB