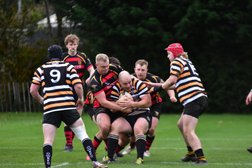 Firstly, we would like to extend a massive thanks to previous Head Coach Dave Johnson, who is leaving his role ahead of the new season. Dave played a pivotal role over his 4 years at BRFC, he led the club to it’s highest ever league finish in Season 21/23 and was Head Coach in Season 19-20 pre pandemic when the club was promoted to Midlands One. We wish Dave all the best in his next venture and thank him for an outstanding contribution to BRFC.

The new coaching structure will be headed up by Dave Towl. Dave is a former 1st XV Captain, Head Coach and most recently Director of Rugby. The remainder of the coaching team is made up of 3 player coaches - former 1st XV Captain Kevin Curtis looking after the backs and Tom Ball and Mark Deaville have responsibility for the forwards. Kev Curtis had the following comments “I am delighted to be invited back as part of the Coaching Staff for next year I throughly enjoyed my first year and feel that significant strides were made particularly on the handling skills front. It was great to see players, particularly front 5 more confident with their range of passing and tip/ pull out options”

The Coaching Team will be further bolstered by Head of Sports Therapy, Alex Spencer. Commenting on Alex’s appointment Dave Towl was full of praise and excitement “Alex has been involved with the club for a while and we are delighted to secure her services for the longer term and in a more formal capacity; particularly using her expertise and qualifications to improve player conditioning and rehabilitation.”

Quality opposition has already been secured for pre season friendlies including Stoke On Trent who were promoted from Midlands One West last year. A former club of Forwards Player Coach Mark Deaville, Deaville had the following comment “We travelled to Stoke last year and they provided an excellent hit out for us, they pipped us to the post and beat us with a try in the last play. We look forward to travelling there again this year. I’m
sure both sides have improved significantly and with them securing promotion last year I’m sure it will be another stern challenge and an opportunity to see some old mates from
school and club rugby”.

A further inspection will come from another quality outfit - Lutterworth, a bogey side for Belgrave last year, beating us three times in the league and cup despite the fact we finished above them in the league.

On the playing front Elliott Walker will continue his excellent work as First XV skipper; player of the season last year and a consistent top performer he will be ably assisted by Roddy Campbell Jonas as VC.

Player Coach Tom Ball was full of praise for Elliott “Elliott is a work horse he is consistently one of the top carriers and tacklers and has a remarkably high work rate. He is someone the players cannot help but follow, somebody who truly leads by example. Roddy brings a different dimension to the leadership group a thinker, a creative player who with his rugby league background brings great flair, handling skills and a dynamic running option”

As ever if you would be interested in joining our senior section please contact Head Coach Dave Towl.