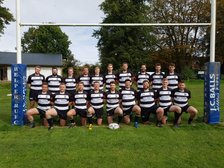 Belper 1st XV just edged out by top of the league!

The start of December saw Belper host top of the table Notts Casuals on a grey and muddy day down Strutts Field.

Casuals have been looking anything but casual as they storm through league fixtures, dropping only one point so far in their campaign. This meant it was a big fixture for 2nd place Belper, as highlighted by Club Captain Callum Schofield.

The game was kicked off by Belper and early handling errors from the visitors saw plenty of pressure applied. Possession was recaptured by the men in black and white and with only a few minutes played, Charlie O’Mara had put his neck on the line with a decisive run to open the scoring. Extras added by Adam Holland, 7-0 Belper.

Belper continued to pile on the pressure in the opening 20 minutes and some great breakdown work by the pack saw an opportunity for Adam Holland to add a couple of penalties for Belper. At this point anyone writing a match report on a live feed basis may have remarked on the quality of the fly half’s boot. As a man who knows the full story I will reserve judgement until the end.

Past the 20 minute mark casuals began to justify their claim to be the best side in the East Midlands and strung together a few passes to release their outside centre through the midfield. Charlie O’Mara
(having agreed in advance with Belper coaches to take his trademark yellow in the first half) was available to manhandle the over excited casual to ground via his comparatively inferior neck. From there on in it became a classic top of the table tussle. Some fine play from Belper saw another penalty over the posts, equally so casuals coughed up a try from a driving maul that perplexed the Belper forwards all game, and a second with a nice move through the centres. Their match report would have you believe they were disappointed with their sub par performance, but that’s a load of bollocks.

After leading for most of the game Belper began to slip and spent more time in defence than attack. A dangerous driving Maul was pulled down by the Belper scrum half, who had agreed that his mandatory yellow should be in the second half to avoid a sin bin overlap. When the referee did blow his whistle for
the offence it was initially understood the penalty was against the Casuals pack for being sacked by a scrum half, however the referee had to concede that the act of a back humiliating 8 forwards is against
the spirit of the game and may give other backs delusions of grandeur. Casuals had edged their way back into the game and showed the resilience their league form hinted at. With only a few minutes remaining in the game their fringe players still had the energy and enthusiasm to charge down a clearing box kick from the Belper fly half. The kind bounce was a sweet reward for the charge down effort and the Casuals player went under the sticks to take the game away from the hosts.

Belpers next fixture will be away at Notts Moderns on Saturday the 8th December where all will hope the passion and pride from the last fixture can be merged with some wiser decision making and control of the game. There will be some big questions asked: When will Charlie take his yellow? Can you make 15
out of 9? Will Callum Mcnulty ever want his training top back? Find out next week...