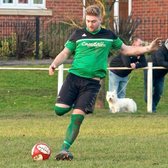 Paul Postlethwaite again had a depleted squad to choose from and decided to fill the squad with youth. 17 year Mark Rathbone came back into the side in goals with the rest of the squad being littered with lads under the age of 21.

The third placed Bulwell FC started the brighter side with Darren Garmston pulling the strings from midfield in a game that had a feel of an end of season game.

Unfortunately Belper United had to make a change after 25 minutes when Tim Perry had to be carried off with a very badly bruised ankle and was replaced by Tom Yates.

There was very little goalmouth action to talk about until 44 minutes when United keeper Mark Rathbone had to save well.

Belper United gradually came into the game after 55 minutes, when after Matt Wright had hit the crossbar, they appeared to have some believe that they could actually get something out of the game.

However, 5 minutes later, Bulwell took the lead, a deflected cross spun across the box deceiving the United defenders and was bundle into the bottom corner.

Belper United had there first period of possession and were rewarded with an equaliser, a pacy run by Sam Vickers saw him again get to the byline before crossing to Jay Harrison to slot home.

The game then drifted towards the final whistle with United having more of the possession but Bulwell looking more dangerous on the break.

After the final whistle Dan Riley was shown a red card for showing dissent to the Referee.

Paul Postlethwaite says 'It wasnt a spectacle for the crowd but I am pleased we got something out of the game. Mark Rathbone made a good save just before half-time to keep us in the game and we were much better in the second half. We now have to patch the side up for Wednesday's game against Title favourites Clifton All Whites at Christchurch Meadow 7.45pm KO.'