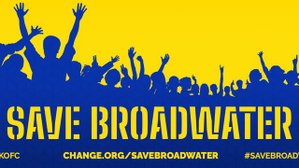 The campaign to save Broadwater for football has been boosted by Berkhamsted Town Council.

On 4 May the council unanimously resolved to itself make an application to Dacorum Council for the ground to be listed as an Asset of Community Value (ACV).

Veteran campaigning resident, John Waller made the case on Zoom and was supported by a speech on behalf of the Berkhamsted Citizens Association by a former mayoress of the town. Six councillors also spoke in favour, with no opposition.

Support focused on the 1920’s public appeal to Berkhamsted residents that raised funds for the ground to be bought in 1924 by the BSGCA. One councillor said that the council had a duty to support the ACV because of it. This original appeal contained the following pertinent words:

“It would be nothing less than a disaster to the Town if these fields are sold for building land, and Berkhamsted is for ever deprived of the facilities for healthy recreation which they afford to all classes and cannot be obtained anywhere else within a reasonable distance of the Town”, and “We earnestly appeal for your support in helping to acquire the ground for the benefit of the Town, and thus securing a permanent open space which will provide recreation not only for the present but for future generations.”

One councillor wanted sight of the trust deed. (The football club have been asking for that from the BSGCA for years without any success).

Another councillor stressed the climate change and environmental impact of travel to Bourne End if housing was built on Broadwater, and a third said an out of town move would be the death of the football club. Another councillor stated that the football club had not asked to move and questioned who was then behind the scheme. The Thakeham /BSGCA partnership was outlined. Mr. Waller explained that Thakeham had written that they were willing to go ahead even if Broadwater was not sold for housing.

The disparity in lease length between the sports clubs occupying BSGCA land was also mentioned. One councillor thought this had a class element, with other clubs looking to accrue funds from the sale at the expense of working-class football, and another councillor explained that the best chance of success in getting an application for an ACV accepted was if it came from the town council rather than individuals.

The club thanks all supporters who signed the petition and lobbied the democratically elected councillors to get this far in the Save Broadwater campaign. Watch this space.