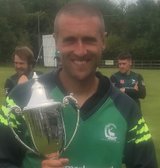 Berkshire retained the Marlborough Cup with a 91-run win over Wiltshire by way of the D/L method in a rain-affected game at Thatcham Town CC.
There was a delayed start and the match reduced to 40 overs a side.
Berkshire, put into bat, posted a useful total of 216-8, with openers Archie Carter and Savin Perera making 33 and 25 respectively in a stand of 64 before Tom Scriven and skipper Richard Morris added 100 from 96 balls. Morris made 58 from 53 balls, which included two sixes in the same over bowled by his Wiltshire counterpart Ed Young, while Scriven scored 54 from 58.
In reply, Wiltshire were never in the hunt, slumping from 32-1 to 87-8 before finishing on 98-8 after 28 overs with seven wickets falling to spinners and the other to a run-out. Chris Peploe claimed 3-20 off eight overs, Euan Woods 2-27, Luke Beaven 1-25 and Max Uttley 1-0.
Share via
FacebookTwitter
https://www.pitchero.com/clubs
Recent news