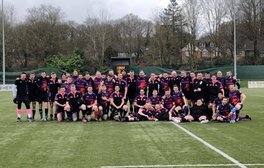 The Year of the Unicorn

The past season was nothing if not exciting with nobody able to predict that it would have unfolded as it did. At this time of writing the whole rugby community is still grappling with the fallout from the 'rona and we still do not have any clarity on how the 2020/2021 will play out. Rather than speculate on the future this is our yearly opportunity to reflect on the past. 2019/2020 was our inaugural season in the IGR Leagues after much work and growth to get us to that point. During the season we welcomed 10 new players to the blessing but sadly also lost members, including it seems our annual loss of a Dan, in this case our reliable Ozzie who returned home (though we were happy to get a reunion before the Covid hit the fan - more later). Post lockdown we have seen a veritable explosion of new talent and I am sure we have good things to look forward to in the year ahead. As ever we are always here to welcome back our alumni and wait for them to reclaim their new Unicorns shirt.

Our season opened with a trip to Cardiff to play our good friends the Cardiff Lions and was something of a baptism of fire. Our inexperience at playing as a team in a competitive match was apparent facing an experienced and well drilled side (and eventual IGR Southern League leaders). Nevertheless there were many positives to take away from the game and build on back at training, not to mention a spectacular inaugural league try for Coach and Captain John Kelly. The away match also allowed the Unicorns to indulge in their favourite shape throwing antics on a spectacular night out in the Welsh Capital, definitely winning the social - play hard, party harder!

Our next match was scheduled to be a return trip to Wales, however the great British weather and flooding required a rescheduling thus we had a break to November which saw us face our fellow newbies in the league the Westcountry Wasps. This was our first home game and we were privileged to be allowed to play on the Maidenhead 1st team pitch in front of a packed home crowd. The Unicorns did themselves proud and secured their first league victory with a dazzling try fest that came off the back of a lot of hard work at training. We also had a tremendous night out with our guests in Maidenhead and look forward to repeating that party when we play away against our good friends the Wasps. Due to a scheduling conflict which postponed our pre-Xmas match against the Outlaws we ended 2019 having only played 2 games leaving us a lot of games to cover in the new year.

The Unicorns started early in January coming out of the season of excess with a match at home against our long term friends and rivals the Wessex Wyverns. The Wyverns had provided our entry match to the league and resulted in a narrow loss for the Unicorns - something we were eager to reverse. In the end we achieved a spectacular turnaround with a decisive victory, starting 2020 with a strong performance and picking up enough wins to see us in the top half of the table, which was our primary objective for this first season.

Though the weather threatened to once more spoil a game in the west, we were fortunate to be able to play our next game at Bristol Bisons in somewhat blustery conditions. The Unicorns put up a strong fight to frustrate the home team coming away with the victory after a scrappy performance by the team, but will probably most be remembered by the unfortunate choice of words in the post match address which gave the impression of lecturing - Once again I offer my wholehearted apology to the Bisons for the implication that came from the choice of words, they were certainly not meant in the way they were interpreted and we look forward to the return fixture. Once again we had a fabulous night out in our hosts city.

The Northampton Outlaws were our next home opponents and would prove to be our toughest match of the season. As previous winners of the Southern League we expected a tough game and were not disappointed, seeing easily how the side claimed victory in previous years. Despite this the game was very close and could have gone either way, particularly once the Unicorns sorted out their scrum - having been steamrollered for the first half. However as is often the case with close and hard games tempers frayed and we witnessed the birth of Red Rajy, earning us a frustrating red card that brought the game to an end early. The incident was unfortunate and not a reflection of the values that the Unicorns hold, but such incidents do happen in games and both the Unicorns and Player involved offer their sincere apologies to our brothers the Outlaws and to the match official for the inexcusable incident and hope that it serves as a lesson to the team to avoid any repeats in the future.

Following our humbling by the Outlaws we found ourselves facing the Unicorns most favourite tournament and fixture the annual Newcastle Ravens RFC Hadrians Cup Tournament. After the usual interesting and eventful coach journey to the Toon we were eager to improve upon our runners up performance of last year. Unusually for the tournament we went with a full and strong team unlike previous years where we struggled with no replacements. Our first match was against the Liverpool Tritons which we approached with a somewhat blasé attitude that ended up costing us the game in a very close match. Suitably shaken from our complacency our next match was against the Brighton and Hove Sea Serpents in which we returned to our normal Hadrians form and secured the victory. Our final pool match was against Typhoons RFC, which we dominated but will regretfully be remembered by the horrific injury that befell the Typhoons and ended the match early. Sending ambassador Pennywise to the hospital to accompany the player we hope that they are now fully recovered and back to playing rugby. Results from the other pools meant that our opponents last year the Newcastle Ravens were knocked out and the Caledonian thebans would face our first match victors the Liverpool tritons and In the Semi-Final we faced our old friends the Emerald Warriors. Much of the tournament is about fitness and resilience and as usual the Unicorns entered the match depleted having picked up a range of injuries. Our opponents are a very experienced and well drilled side and that discipline was especially apparent on the pitch. That said the Unicorns did themselves proud putting in probably the most spirited performance I have seen with some outstanding performances during the game and effort that was apparent right up to the final whistle. The Emerald Warriors had earned a well deserved victory and would go on to win the Hadrians Cup in the final against the Caledonian Thebans. Our performance secured us 4th place in the expanded tournament which was a good result and special congratulations go to Aberdeen Taexali for winning the newcomer tournament in their first competitive tournament - Well done! Another great tournament for the Unicorns and a proud moment as Captain and Coach, but little did we know that this would be the end of the season.

Our final home game was to be against our friends the Birmingham Bulls, organisers of our favourite Touch Tournament - Touch My Brum (which also became a casualty). However around this time the defining event of 2020 had begun to rear its head. Many in our blessing work in industries attached to Heathrow and the Unicorns ended up picking up casualties of Covid which meant that for epidemiological reasons we were forced to cancel the match - with a view to holding the fixture two weeks later. In the end this was not meant to be and a week later the UK would head into lockdown which would see draws awarded for our outstanding matches against the Birmingham Bulls and Swansea Vikings.

The IGR League decided that there would be no overall champion for the year and instead awarded league leaders to the Newcastle Ravens and Cardiff Lions for the Northern and Southern Leagues respectively. In the end this meant that the Unicorns ended the season finishing in 4th Place in the Southern League which is a fantastic result for our first season and gives us something to work from moving forward.

With so many stand out performances across the season there was going to be strong competition for our annual awards.

Players Player of the Year was awarded to John Hamp - who also picked up Team Merit Award. John joined us at the start of the season after being tempted by us at Oxford Pride and his commitment to the team since then has been unquestionable. His skills have steadily improved over the season such that he is a formidable presence on the pitch - great progress for someone who has had a break from rugby since school.

Best Newcomer of the Year was awarded to Richard Dunn. Richard joined us from the Outlaws when work brought him our way and his skills as well as delight at scoring try's has been an infectious staple of our games this season. We look forward to much more from Richard and together with John Hamp make a strong unit in the Unicorns forwards that should serve us well in future seasons.

The most coveted of all awards is of course the Golden Unicorn, awarded for most points scored in the season. This years inaugural award went to Charlie Fidler our ever reliable Full Back and Winger. Richard Dunn picked up the tournament Golden Unicorn for Hadrians Cup.

Congratulations to all the Award Winners.

As the season closes it also brings a curtain down on my Captainship of the 1st XV and also my position as Head Coach. 2020/2021 will see Captain John Hamp lead the Unicorns on the field assisted ably by Andrew Jones as Vice Captain. It has been an honour to lead the Unicorns for their first season and I know I leave the team in very capable hands.

From a coaching perspective these past 2 years have been a great joy in seeing the development of those who have never played rugby become competent and able players, competing at a high level in league, tournaments and touch. The team has come such a long way from when I joined in 2018 and I think that to take the team to the next level fresh blood and ideas are needed. As such I am delighted that Daryl Brady has stepped up to take the reigns at training and I know that his experience at Maidenhead will serve him well in getting the team ready for the coming season and Union Cup 2021 in Birmingham. It has been a pleasure to have developed the team and see the difference both on and off the field and I want to thank the Committee for their Confidence and Support as we went from a rag-tag bunch throwing a ball about to a strong and talented team.

We are always looking for new players and supporters who want to join the blessing and #bepartoftheunreal if you want to be a part of our journey please contact any of the committee. Alternatively just turn up to training on Tuesday's and Thursday's 1900-2100 at Braywick Park, Maidenhead and we will look forward to welcoming you.