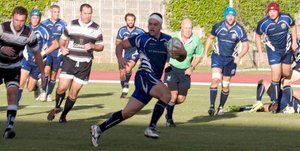 Renegades Mariners 28-5
Police Teachers 5-10
Police Mariners 25-7
Teachers Renegades 5-22
Renegades Police 10-0
Teachers Mariners 34-0
Renegades win the 2019 BRFU 10's Trophy
Match report
Forwards:
Gilbert Artie Darrell - prop / lock
Thinus Dreyer - hooker / flanker / prop
Tawanda Chidzawo - prop
Owen Siese - hooker
Henry Johnson - flanker / 8
Adam Rossides - flanker
Jordan De Shields - lock
Adam Richards - lock (never found his keys to come down)
Backs:
Shaun Wonfor - scrum-half
Dan Cole - fly-half
Spencer Brown - coach / wing
Ryan Murray - wing
Chi Smith - wing
Harvey Castillo - center
Stephan Smit - Captain / center
Cobus Jonker - center (Injury reserve)
Police Wrapped Up the second weekend of the tournament for 10's rugby with a few disappointing losses but overall great improvement in our patterns and play style. Police women had a strong preseason and are now in training for the season which will start with the Mad Hatter's tournament.
While this is still technically preseason and introduction back into contact from our cardio intensive training, there is silverware to win and there was quite a strong desire to start off strong this weekend.
Opening up against Teacher's saw Police faltering a bit. Unforced errors saw an early yellow card coupled with numerous back-to-back penalties... however passing and rucking were highlights of our play and will be strong starting points as the season builds.
Early injuries started piling up which stressed an already light bench and had players out of position throughout the rest of the teachers game and the day.
Not to take for granted the second game versus Mariners saw Police getting to a physical confrontation that we typically like to avoid. Mariners bring a solid and heavy pack but are developing quite the back line, a fact our players need to keep in mind. A solid pattern scored a try through a midfield cut that went passed yours truly, who was asleep at the wheel, saw Mariners start to close down the score... but Police opened up with numerous attacking patterns that we have been practicing.
After a 30-minute break Police found themselves facing a nemesis in Renegades, who also seem to be bringing out a cadre of new and should be retired players. A battered Police team lead by Steady Eddie I mean Captain Stephan Smit and former Captain (not in his mind) Henry Johnson saw Renegades and Police tied up at the halftime. Quite a strong showing. However players out of position, some injuries coming through as well as a lack of fitness saw an amount of handling errors that resulted in one try through a break for Renegades and then later on a penalty kick. Of note Police scrum was in top form beating Renegades a few times and also resulting in a penalty for Police.
Man-of-the-Match goes to Henry Johnson for a stellar performance, all over the park making tremendous plays for the club. However he is equally awarded "Donkey-of-the-Day" by his desire to see rugby turn back into football with numerous strange kicks that we're certainly not in the game plan.
Honorable mentions go to Dan Cole, Chi, Harvey, Owen and Thinus for suiting up to play with Mariners and some of their games, including Dan Cole playing against Police (the nerve) for Mariners for a grand total of 5 minutes.
Overall Police are in a strong position with a developing bench and a number of players coming back for the upcoming start of the season. Set piece, lineout and scrum are looking good as well as new formations for the back line coming from the coaches and captains.
The season technically kicks off with the Mad Hatter's tournament on October 19th, followed by the captain's BBQ on October 20th and hand out of the Police 60th anniversary new snazzy kit.
Share via
FacebookTwitter
https://www.pitchero.com/clubs
Recent news