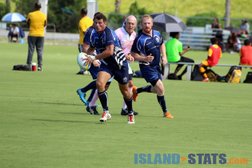 The Teachers went down 10 - 0 to the Mariners, Chakote Wainwright scored a Try and the Mariners got a Conversion and a Penalty from Rory Dublin, the would then fall 42 - 0 to the Renegades. The Renegades got 2 Try’s from Jonathon Verling, while Charlie Craig, Cedric Ennius, Sam Watters, Jamie Baum and Richard Cumbers added a Try each, Verling also added 3 Conversions.

The Police and Teachers ended their match 19 - 19. The Police got Try’s from Dennis Warner, Phil Rednap and Adam Rouseides, to go along with 2 Conversions from Dan Cole, while the Teachers got 2 Try’s from Tashon DeSilva and a single Try from China Smith, Mikel Simons added the Conversion.