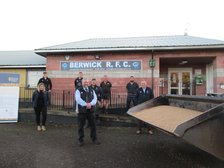 Brilliant Effort by our farming members

Grain donation initiative raises more than £20,000 for local rugby club
Neil Armstrong, Berwick Rugby Club Chairman of Sponsorship and local farmer, said: “Ahead of harvest, I had a brainwave to approach the local farming fraternity to generate some much-needed cash as we knew we wouldn’t be taking any function bookings or hosting any matches for the foreseeable future.”
“We put a letter together asking for a donation of a bucket of grain and were overwhelmed by the generosity from the local farming community, collecting wheat from 70 farms within a 12 to 15-mile radius of the club, and also some other cash donations from none cereal farmers.”
A total of 103 tonnes of wheat was collected from the 70 farms, which MSP – the current main shirt sponsor of Berwick Rugby Club – topped up to 115 tonnes and then they will market it on our behalf.
Antony Spooner, President of Berwick Rugby Club, added: “We’re incredibly thankful to the local farming community and MSP , in particular, the six local farmers who spent a full day collecting the wheat from all of the farms in their own tractors and trailers. The farmers’ support has ensured that same matchday buzz and hospitality can be enjoyed once these challenging times are over and things are back to normal .”
Share via
FacebookTwitter
https://www.pitchero.com/clubs
Recent news