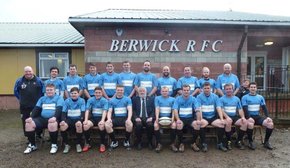 2nds claim win in the opening game of the season

Berwick opened strongly against Blyth with a Darren Goodfellow try two other tries followed with Duncan Lough and Allan Middleton all unconverted.
Just before half time Blyth added the best try of the half with good handling and support play this was converted ht 7-15

Blyth then had the upper hand with two tries one converted to lead 19-15. Middleton then added a penalty to reduce the score to 19-18 Berwick then realised that if they moved the ball to their speedy back they could win the game .A brace from Aidan Rosie gave the bears victory. Robson Scott and Jackson caught the eye in the backs with Mutch Miller and Lauder to the for in the forwards.