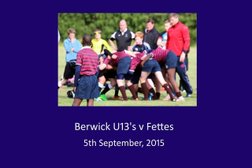 I woke up early in anticipation, I couldn't sleep. The first game (really any game) of the season is always the same. A hint of nerves but mainly just a feeling of let's get the season started. Ben was the same, up early, raring to go.
Fettes u13's were looking for a game to bond their team. Their school teachers, Mr Wood and Mr Bywater brought them down to the Borders for a two game tour. Having played St Mary's yesterday and having endured an overnighter, we knew, if we started well we could catch them cold.

This year we have a large squad. At present 28 and counting. Fettes and Berwick coaches decided we should have 4 x 15 minute games to work with our squads. It will be the proverbial 'selection headache' this year with such numbers but the four games gave everyone equal game time.

Berwick certainly benefitted from Fettes's overnighter and that they had only been back at school this week. With a few training sessions under our belt and our rugby brains remembering last season as if it were last week, we were soon back in the swing of things.
In a nutshell, when Fettes defended narrowly, we spun it wide and the wingers ran in the tries. When they changed tact and spread their defence wider we hit them up the middle or placed intelligent kicks in behind them for runners to chase, so intelligent stuff from many today. Some quick hands in the backs and that instinct of where their support runners were, came flooding back, all too quickly for Fettes.

Also of note is in three out of the four games our defence held strong and they didn't score, which would have even pleased Shaun Edwards!

Overall, a really good start, only really marred by the injury to Euan Cromarty who is doing fine at home, still groggy but having eaten something and on the mend.

A pleasure hosting Fettes as they were a credit to the rugby ethos. We look forward to a trip to the city to play at Fettes when asked.