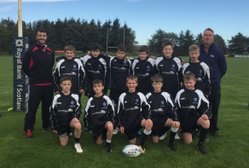 After 10 patient weeks of training the Berwick under 13 rugby team took to the pitch for their first fixture on a full sized rugby pitch taking on a Novos team who already had 3 fixtures under their belts. The boys were really up for this fixture and right from the kick off pressurised the Novos team keeping them well pinned back and patience brought just reward when some solid work at the ruck and maul from the Berwick forwards produced the ball to allow Scrum Half Rory Hindhaugh to release his back line and Centre Ben Nicholson scored a well deserved try and converted to give Berwick a 7-0 lead. Berwick then developed confidence from this and as Novos pressurised the Berwick line the forwards stood up to the mark and drove them back at every scrum, ruck and maul. Berwick cleared the lines to move back in to the Novos Half and with pressure forced a knock on and set up some quality ball from the resulting scrum to again allow the backs to run the ball along line and an inside loop from Centre Jamie O’Reilly saw him a superb try again safely converted. Novos now really started to put the pressure on two excellent tackles from prop Andrew Edmondson helped save the day and brought commendation from all spectators. Berwick then took the game to Novos working hard at the breakdown to allow Ben Nicholson to score his brace again conversion was taken by Hindhaugh. Novos were determined to get back in game and pushed hard for the Berwick line and eventually managed to force the way over for a well deserved try. They then again tried to pin Berwick back but some excellent Line Out work from Josh Smith ensured they couldn’t get the clean ball desired. A full time score 21-5 brought to a close an excellent game of rugby from both teams and the cheers and handshakes afterwards was a huge credit to the boys, coaches and spectators from both teams. This was an excellent display from all the Berwick team really working together as they travel to Morpeth next Sunday for first away fixture.