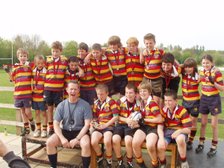 A Great Win for the U11s at the County Festival!!!

In a fantastic display of teamwork, sheer determination and heart, Bicester U11s triumph at the Oxfordshire County Festival held at Chipping Norton.

Like many clubs, the Easter holidays took their toll on our availability, and so it was a hybrid As squad that we took to Chippy for the County Festival. Though it was a shame not to be able to take a B team squad, only 2 of the 10 clubs present were able to field a B team, which says it all.

The very warm weather and bright sunshine meant that the key to the day was to conserve energy for the games in hand.

The 10 clubs present for the A team competition were split into 2 pools. In our pool were Grove, Chinnor, Gosford All Blacks, Witney and Oxford Harlequins, and we knew it would be a tough one.

First up was Gosford All Blacks. Unusually for us, Bicester started with a real sense of purpose and attack, and spent much of the first half camped in Gosford’s half. So it was against the general flow of play that Gosford managed to run in a try in the corner. Not long after, with Bicester again under pressure on our own line, Lewis was unlucky to have his clearance kick charged down and the bounce was kind to Gosford, allowing them to chalk up their 2nd. This rattled Bicester and whilst the team came back with some strong attacks, the game ended without a score.
Bicester 0 : Gosford 2

Second was Oxford Harlequins, and memories of our underestimating them back in January. Smarting from the loss to Gosford was the spur needed, and Bicester put in a much better performance, with concerted attacking rugby. The game was very evenly balanced and could have gone either way, but the sheer grit & determination of the Bicester team won through, with Finn taking a pass from Edward to crash over. Quins tried hard to come back, but some fierce defending from Niall, Lewis, Bradley and others kept them out. A deserved first win for Bicester.
Bicester 1 : Oxford Harlequins 0

Next up were Chinnor, who were already showing themselves to be the in form team of the tournament. Whilst hugely frustrating, it was nonetheless fascinating to see that Bicester just did not perform as a cohesive team, despite the ‘high’ of beating Quins and the obvious potential ability. This major lack of focus & discipline resulted in a bruising loss (even allowing for some pretty marginal calls on some tries being allowed which probably shouldn’t have been), which in the end turned out to probably be the best thing for Bicester as I will explain.
Bicester 0 : Chinnor 7

No rest for the wicked – Bicester were “summoned” immediately after the Chinnor match to play Witney, despite the schedule indicating a 40 minute break was due. (By then the timings had somewhat gone to pot.) We had to decamp to the second U11s pitch, which – frankly – was pretty awful. Little grass and hard as nails, making the “rolling meadow” on which we’d played the first 3 matches look like heaven.

So, Witney. Bicester were pretty shell shocked after the Chinnor game, and the rather frank & stern team talk I delivered. Their day was poised on a knife edge and could have easily gone one of two ways. This is where I get slightly emotional and have to hand it all to the kids – they did exactly what we asked of them, and the Witney game changed their day completely. Right from the first whistle they were like a transformed team. It all gelled. There was aggressive running, support play galore, even the ball going out wide. Tackling was fierce as anything, despite the pretty appalling ground conditions. We had players running themselves red in the face. Injuries were being taken and shrugged off. First Niall, then Finn, then Edward all crossed the line, putting Witney to the sword. We were back in business.
Bicester 3 : Witney 0

Last up in the pool stages was Grove, following right on after Witney. It was amazing to see – the Bicester team, tired as anything after 4 hard matches, still on the grim hard pitch, were chomping at the bit and ready to go. From the very first whistle, right to the last it was a joy to watch. Bicester in their stride. All the elements from the Witney match were built upon. First blood to Edward driving over the line from a maul, followed in quick succession by tries from Niall, Lewis and a fine effort from Charlie. Grove could only manage a consolation try in the corner against the flow of play. Rucking and mauling by Bicester was some of the best I have seen this season, and simply allowed us to dominate possession and come away with a hugely deserved big win.
Bicester 6 : Grove 1

These pool results meant that Bicester had made the Shield Final and we would be up against our old friends, and hosts for the day, Chipping Norton. We have always had very close games against Chippy, and we knew we were in for a tough one.

The final started with Bicester taking the game head on. The very same passion and determination from the Witney and Grove matches was plain to see. Chippy, on the other hand were no walkover. They had a very strong home support and were equally determined to win on home turf. Even so, the hammering attacking runs from Bicester, particularly in the centres, wore Chippy down, and at last Henry blasted through to score. Cue huge roars from all the Bicester parents – those who hadn’t already lost their voices! This score, though, spurred Chippy on and though Bicester managed to repell a whole series of attacks, eventually Chippy sneaked a try on the corner to level the match. This kicked Bicester up a gear and saw us camped out on the Chippy line as the seconds counted down to full time. Finn was oh so close, but was held up, and then Edward leapt like a salmon into the corner – we thought he had it, but it was denied by the ref, and that was full time. Into extra time we go.

Right then, memories of the County Festival final vs Chippy in 2009 came flooding back – aka “The Never-ending Game” where we kept on playing extra time until one team one. That time it was Bicester – could we do it again?

Some key words before the start of extra time got the team focussed on the job in hand, and my word it did the trick. Bicester came out with a purpose and passion, and an absolute belief that we wanted and deserved to win. Very soon the pressure paid off as Edward sledge-hammered his way over the line to score. Chippy tried to reply, but by then Bicester had them in their sights and let nothing go. It was an absolute joy to see their biggest player (prop) being held in the scrum by Jacob, and also being taken down in a crunching tackle on the wing by Natalia. Every tackle put in by the Bicester team was done with a passion and commitment. The continued pressure paid off, and it was not long before Lewis charged through the Chippy lines to score, and next thing we know it’s all over. BICESTER WIN THE SHIELD!
Bicester 3 : Chippy 1

Reflecting on the day, there are so many things I could mention but I’d be writing all night. That said, here’s a few highlights for me.

The players who have more often represented the B Team this season, but who stepped up to join the A squad performed really well indeed. Don’t forget, the teams we played are the best in the county, and you all more than held your own.

There is not one member of the squad who I cannot say that I think they gave it their best. We weren’t perfect on the day, far from it, but the commitment and passion that came from every player was what made it work.

I have to say that Niall, Henry, Lewis, Charlie, Finn and Edward did a great all round job throughout the day, leading from the front from start to finish. Sam D and Jacob came up against some fierce some props, but they never backed down. Harry R, despite still being new to the contact game, took to the 2nd row position like he was born for it, and played a big part in driving forward the loose mauls. I gave Taylor probably the toughest job of the day in an unfamiliar role at Fly Half, but he fronted up and delivered every time whether defensively or in attack. It was great to see Max and Harry B with ball in hands (at last) and what a difference this makes to our attack, with their strong and committed running. Callum moved to full back, and proved he was an excellent safe pair of hands, taking cleanly a number of pressure balls, and taking the right decisions of how to return to attack. Sam T showed some real steel in both attacking runs and defensive tackling right from the first match, and carried this through the day. Ethan’s support play was spot on, linking up with Edward on the wing again in a repeat of Aylesbury 2 weeks back. And Natalia’s tackle on the big chap was so good it’s worth mentioning twice! Not to forget Bradley, whose commitment to the squad meant he turned out even though he could only play for a couple of matches. His trademark fearless tackles stopped several runs down the wing, and it was great to also see him with ball in hand, making a break.

It was a very long old day, finishing at c. 5pm, but I left Chippy with an enormous sense of pride in what the squad had achieved. They thoroughly deserved their trophy, and what a great way to round off the season.