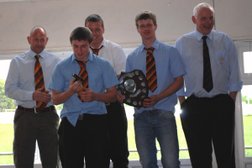 Player of the year - Ed Mawdsley for his effort & leadership all season, winning ball, turning ball over and generally being missed when he's not there!

Mentions also to:-
Mats - Great captaincy for the latter part of the season, and an excellent display at 9 consistently

Tim - Solid in defence, sometimes using his head (literally) to tackle and increasingly his attacking flair

Callum N - Possibly the few weeks out costing him the POY slot, a fantastic first season back in the fold

Most Improved - Craig Greenslade. Improved no end this year, growing in confidence and one of the first names on the team sheet - second row stalwart. Others nominated were Jordan, PJ.

Players Player of the Year - PJ Gardiner. Overwhelmingly voted as the best player by his peers - his willingness to play anywhere from front row to 15 and all positions in between and always with a huge smile - well deserved.

See you all next season - keep fit, don't fall off your bike and have a good rest - pre season fitness with a vengance coming soon.
Dave