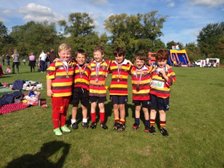 U7s first Festival, and what a success!

Bicester A won 2 and lost 2 coming third in their group. They showed huge improvement over the course of the day having the largest side and playing the most games.

Bicester B won 2 and lost 1 coming second in their group and were helped along magnificently by Sean Guinan's coaching from the side line.

Bicester C drew 1 and won 2 coming a blinding first in their group and playing their socks off for an undefeated day.

We would like to thank all of the parents who helped out today especially those who watched over the teams and had a bash at refereeing. It really was a big help. If we are able to muster up this kind of support for the rest of the season it would be a big help, it really did help the day run smoothly.