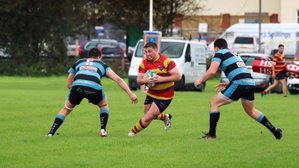 Both teams are to be complimented, after staging a fiercely contested and entertaining game in appalling weather conditions. Bicester bounced straight back from their heavy reverse at Banbury last week, as their well-drilled defence confined Witney to just 1 try in the first half. Then, despite playing uphill, they kept their try line intact, and scored both a converted try and a penalty goal during the second period. In a match dominated by the 2 sets of forwards, the Hosts can thank their back row of Francois Wiese, Jack Horwood and no.8 Wes Westaway for a major contribution to this well-deserved first victory of the new season. Wiese was sin-binned midway through the 1st half, yet winger and ‘man of the match’ Matt Duncalf, scored his side’s 1st try, during the flanker’s absence. Bicester lost centre Lemeki Valevou after a few minutes play, due to a headwound, which required 8 stitches, and Duncalf himself departed with a leg injury during the 2nd half. however replacements Oliver Dawkins, who came on for Duncalf, together with Will Thurlow and Josh Preston, all slotted in perfectly.

Charlie Bethell was unsuccessful with a long range 39 metre penalty attempt after 15 minutes play, but Bicester went ahead, prior to Wiese’s return from the sin-bin. Bethell kicked long and deep down the right flank and Bicester then worked the ball into the centre from the ensuing scrum. Witney infringed and the penalty was kicked back into touch on the right. Superb driving play by the home forwards sucked in the Witney defence, and winger Duncalf sprinted clear to touch down in the right corner for an unconverted try. 5 minutes later the visitors equalised, when a slick Crossfield handling move from a scrum, ended with second row forward Scott Mortimer galloping across in the right corner, Fly-Half George Lewis’ conversion attempt struck the right upright before bouncing back into the playing area.

Bicester regained the lead 18 minutes after the break. Hooker Will Anns’ brilliant blind side break, resulted in a scrum award to his side on the left from which tremendous driving play by the Bicester forwards, earned them a penalty, which fly-half Sam Richardson calmly knocked over. Witney drew level with a penalty goal from fly-half George Lewis. Bicester counter-attacked immediately through flanker Wiese and replacement prop Josh Preston before Charlie Bethell fired another long kick to the left touchline. Jack Horwood took a fine catch in the line-out, Witney conceded a scrum, and Bicester, once again drove powerfully up the left side with second row forward Dan Spencer plunging across for the winning try, which Sam Richardson also converted. With just 6 minutes of playing time left, Bicester were penalised at a scrum right at the end, and Witney kicked into the left hand corner. A Bicester victory looked to be threatened, but flanker Jack Horwood snaffled Witney’s line-out possession, and Bicester celebrations began.