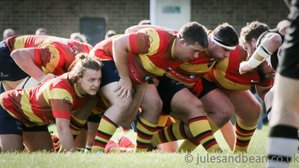 A superb all-round performance by the entire pack of forwards proved to be just enough for Bicester to be acclaimed worthy winners, in this hard fought contest. Marlow were well organised and incisive behind the scrum, but their forwards struggled to retain possession in the set-piece scrums and Bicester flanker Jack Horwood stole their line-out ball four times. Bicester were dominant in the loose play too, where the energetic ball carrying of no.8 Wes Westaway, combined with the tackling and running skills of Jack Horwood and fellow back rower Ryan Biscoe, earned the trio a communal match award. Bicester scored first, but 2 tries by Marlow gave them a 12-5 lead, 16 minutes from half-time. Then, with the last kick of the 1st half, fly half Sam Richardson reduced the home arrears to 4 points. Bicester regained their early lead with 2 second half tries, before Marlow bounced back 6 minutes from the end with a try, which mercifully for Bicester, they failed to convert, and home celebrations commenced.

After just 2 minutes Bicester were ahead. A chip kick inside the Bicester half on the left by winger Adam Hall was scooped up by Ryan Biscoe, who sent scrum-half Christian Mann careering down the left-side and the ball emerged from a series of rucks across the centre of the field, for right wing Phil Salkeld to dart across for an unconverted try in the corner. Ten minutes later Marlow safely gathered a Bicester kick ahead from a line-out, and the ball was transferred across the field to the right, for winger Stuart Jordan to cross in the corner for a try, converted also by full-back Nicolas Carvey. At this point, Christian Mann retired due to a head injury, and replacement Ollie Dawkins took over at scrum half. Bicester suffered another blow when centre Dan Spencer went off with a knee injury and soon, despite a try saving tackle from Jack Horwood, Bicester were punished for losing their (only) line-out ball, as Marlow hooker Curran McMillan stretched across for a try on the right. Carvey’s conversion attempt was off target, and following pressure by Bicester just before the break, Wes Westaway’s rampaging drive off a scrum, down the right, was rewarded with a penalty award, which fly-half Sam Richardson banged over from 18metres.

Bicester regained their lead midway through the second session, after a strong tackle on the left-side resulted in a scrum award. as the forwards drove on powerfully, a penalty was conceded by the visitors, and Dan Spencer stormed over to the left of the posts. Richardson’s conversion attempt was unsuccessful, and Dan Spencer retired again this time permanently. Straightaway, Marlow loose-head prop Ross Hayworth was sin-binned, for striking Jack Horwood, and Bicester lost no time, launching a slick handling move which began on the left, continuing into the centre, before being rapidly switched back to the left-side, where full-back Charlie Bethell sent winger Adam Hall scorching across in the corner, for another unconverted try. With 17 minutes left, Bicester were now 6 points ahead, but the visitors were not yet finished, and 6 minutes from time, another Bicester kick was collected, before being moved out wide to the right where centre Vanavasa Bai raced across in the corner. To Bicester supporters' delight, Carvey’s conversion attempt failed, and Bicester were victorious for the second successive Saturday.