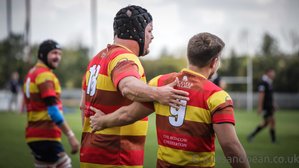 Despite the wet and windy conditions, both teams competed ferociously in this high quality, fast, end to end contest. Though Bicester enjoyed an equal share of the territory and possession takes, they had only 1 converted try to show for some truly exciting multi-phase play in both halves. However, the Centralians defence remained resolute throughout, and in the first half, with the elements in their favour, they scored 3 tries to lead 17-0 by the break. Though gallant Bicester reduced their arrears to 10 points, 10 minutes into the 2nd half, they were unable to break down the home rear guard, and a 4th try twenty minutes from the end effectively sealed the points for Centralians. The visitors were dominant in both scrums and line outs and won the penalty count 10-5, but well worked attacking moves were too often ruined by handling errors or wrong options.

After just 5 minutes the visitors were penalised for a rare line-out aberration and a crooked throw presented Centralians with a scrum, from which no.8 Lewis Cameron sprinted 40 metres unchallenged to the try line on the right. 7 minutes later, Bicester conceded a penalty at a Centralians scrum and from the subsequent line-out, the home openside flanker Craig Ballinger broke sharply, before a sweeping cross-field move resulted in full-back Lewis May racing across wide-out on the left. Bicester full-back Charlie Bethell was then off target with a long range 40 metre penalty attempt, and following a slick handling move by the visitors, which emanated from a stolen line-out, Bethell was unsuccessful with a 36 metre kick. Ten minutes from half time, Centralians struck again when they drove off a line out on the right, before working the ball into the centre, where fly-half Wayne Mulhern darted across for a try, which was also converted, by centre Shay Morgan. The remainder of the 1st half, belonged to Bicester, as forwards Will Anns, Freddie Myatt, and Ryan Biscoe, and backs Francois Wiese, Charlie Bethell, Adam Hall and Harry Gaunt, all featured in some good attacking play. As the second period began, Charlie Bethell was again unsuccessful with a 39-metre penalty attempt, and soon Bicester forwards were held up close to the try line. Francois Wiese then also went close, and prop Alex Macdonald knocked on, as the line beckoned. Soon, the visitors were rewarded when winger Adam Hall’s lightning burst down the left side from a scrum, was continued inside by flanker Freddie Myatt, before scrum-half Craig Smith in the centre, wrong footed the Centralians defence to streak across under the posts for a try, converted by replacement fly-half Sam Richardson. Straightaway, Shay Morgan stroked over a 35 metre penalty goal for Old Centralians and the brave Bicester challenge ended, when no.8 Lewis Cameron stretched across for his second try, from a 5 metre scrum. The visitors never gave up and they continued to pressurise Centralians, right up to the end. First winger Peter Tarrega raced ahead, and then a tremendous burst through the centre by prop Dave Lawther ended in a knock on, as he approached the try line.

This will be a coach trip. The coach leaves at 11.45 prompt.