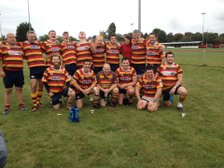 Saturday 12th November
B.B.O .DIV.4 (North): Aylesbury 3rds 20, Bicester 3rds 0-
Through guilty of indiscipline throughout, a quicker and more cohesive Aylesbury side, earned a well -deserved bonus point victory, in this division 4 contest. Despite conceding 8 penalties in the first session alone the home team scored 3 tries, to turn round 15-0 ahead. They conceded a further 17 penalties after the break but though Bicester enjoyed a lot more territory and possession as a result, they failed to break down a well organised Aylesbury defence, and 12 minutes into the final period, they conceded another try.
Aylesbury were ahead after 5 minutes, after a penalty was kicked towards the left corner, and though the line-out drive was halted, a second penalty was awarded. This time, prop Jim Dodds was driven across near the corner. 9 minutes later, Aylesbury extended their lead to 10 points. Another penalty was fired into touch on the left, and as the forwards drove strongly, the ball was then recycled across the field to the right, where winger Chris Alston crossed for a try. Next, from a quickly taken penalty near half-way, a slick handling move was taken on by the Aylesbury forwards, who drove down the left side, before the ball was transferred to the right, for a full back Lewis Partridge to score another unconverted try.
Early in the second-half, after Aylesbury safely collected a Bicester clearance kick from a scrum on the left, a combination of excellent handling by the hosts, together with some poor tackling by the visitors, resulted in no. 8 Dan Davis rumbling across for Aylesbury’s 4th and final try. Bicester fought back strongly, but were unable to penetrate a solid home defence. Despite this set back, Bicester remain in third place, behind leaders Gosford All Blacks 2nds, and Banbury 3rds.
Share via
FacebookTwitter
https://www.pitchero.com/clubs
Recent news