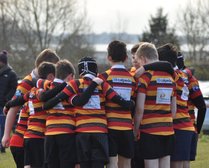 Bicester boys saw out their season in true style, with an impressive victory over the visiting Didcot team. Conditions were set fair and offered an opportunity for some flowing Rugby, nevertheless even the boldest of odds-makers could not have predicted the 7-4 win in the first game, made possible by Bicester’s lightning start. Cameron F opened the scoring, running in the first of three tries with a powerful run from his own half. After a period of possession and great support play exemplified by an industrious Joe C, Michael W ran in the first of a brace of tries. Despite a brave Didcot effort in the second half which saw the visitors score four tries, the Bicester boys remained resolute. Ollie G assured victory with two tries, putting the result beyond doubt. The first was a superb try, evading all attempts to stop him as he jinked, dummied and side-stepped all the way from the Bicester try line to score.
Game two, was a Ba-Ba’s, mixed team affair, in which James P, exhibited a great attitude and sportsmanship leading the line for the visitors. The mixed sides saw a balancing out of possession with both teams seeing plenty of the ball. After much to’ing & fro’ing, Edward T, reinvigorated by his new ‘pay as you score’ deal combined his strength with some powerful running to score his first try of the morning. Didcot players were also amongst the tries, scoring twice. Ollie G made another contribution quickly turning defence into attack, shortly followed up by Ellis G-B who dived over in the corner for his try. Not to be outdone, Michael W scored an impressive try, running the length of the pitch to ensure the spoils were shared at 3-3. Great endeavour, support play and team ethic by all was hallmarked by Cameron. F’s magnanimous pass to his Didcot counterpart, despite having beat the opposition with only the try-line in sight. Indeed, both teams personified the values of our great game and were a pleasure to watch.
In the final game, which was a return to the normal proceedings, Bicester set out to continue their dominant performance from the first game. Indeed, they succeeded to underline their great performance with another 7-2 victory. Cameron F rounded his day off with a hat-trick of tries, while Edward T profited (quite literally!) again by securing a brace. Ells G-B darted down the wing to score his second of the day, while Ciaran M, eager to impress his fresh-faced fan club, topped off an impressive display at fly-half with a determined try, evading a bamboozled Didcot defence.
A great morning’s Rugby and deserved win. Each and every one of you should be proud of yourselves - well done boys!
A special mention must go to our visitors who should be very proud of their team. Didcot, were exemplary of what grassroots rugby is about and we look forward to future fixtures between us! #RugbyFamily
Share via
FacebookTwitter
https://www.pitchero.com/clubs
Recent news