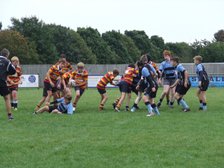 Witney took an early lead with a try in the first 2 minutes, not the greatest of starts from Bicester’s U13’s. Awesome scrummaging from the forwards lead by the team captain Archie Devlin(prop), put the pressure on a defending Witney to Kick the ball from their own 22 only to have Reece Sullivan (full back) return the ball for an amazing try taking to the first half whistle all even at 5 all.
Second half saw Bicester come out with all guns blazing with everyone working as a team. It was not long before we had a second with George Zverko (second row) powering through to get another 5 points on the score board. Further pressure found Bicester just inside Witney’s 22 with a very tactical play, Harrison Baker (scrum half) exploited the blind side from the back of a ruck to score Bicester’s third try.
Witney with strong attacking play and taking full advantage of the slope, managed to squeeze through Bicester’s defence three times to take the score to 15 to 20.
In the last few minutes of the game Robert Helyer (centre) recovered the ball and with a very powerful run from his own 22 ran the ball in for a very impressive try.
Unfortunately in the dying seconds of the game, with Witney getting an offside penalty took full advantage of a retreating Bicester to steal the final try ending the game 20 to 25.

All in all a very even game, with some fantastic work from Bicester and Great Spirit from both teams.

Man of the Match - Niall Guinan