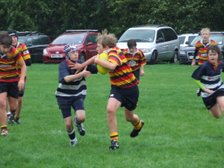 one to cheer about...

A cold and wet Sunday Morning at Banbury

first 20
A cold and wet Sunday Morning at Banbury didn't start well with Banbury taking an early lead five minutes in. This first try was the wakeup call Bicester needed as they took control of the game and pushed Banbury back & open the way for Tim Walman (fullback) to get Bicester's first try.

Second 20
Banbury started of with a big push driving Bicester back inside their own 22. A fumbled ball dropped just over the try line opened the door for Banbury to score another try. Bicester kept their heads and fought on with some great offensive work, winning the ball at ruck's and mauls passing the ball down through the backs to get some great yardage.
Then He did it again, Robert Helyer (centre) opened his legs and powered through the Banbury defence to score another Try.

Third 20
With the end in sight and the belief we could finally turn Banbury over on their home ground the U13s fought on not relinquishing the ball. More great ruck's & maul's with some fantastic tackles from all helped Bicester control the game. George Zverko (second row) ran the ball in from just outside Banury's 22 for a great try, handing off three players in the process and winning the game for Bicester.

Man of the match - George Zverko