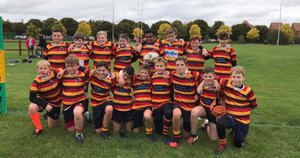 Games against Buckingham and Chipping Norton

So to our third set of matches in the season and some very well deserved points worthy of mention! We fronted 24 lads for the games.

Game 1 – Bicester vs. Buckingham 26:21
The first half saw us give all the points to Buckingham but not without having to make them work for it. Then in the second it all turned around as we saw we could score those elusive points. Andy gave us the first try followed up by a conversion. Three minutes later saw Mike on the charge and running the pitch for another try & conversion. Keeping the pressure on Herbie piles in 5 mins later for the try. This was no walk over with the opposition keeping up the pressure but Mike decided that was not enough and took them for another 5.

It seems that things are beginning to click, communication, using the size of the pitch and realising we can do it. Excellent work lads.

Game 2 – Bicester vs. Chipping Norton 0:13
Chippy were harder work with no points for us. Given the strength of their team we did manage to control the game using the spaces.

Game 3 – Bicester vs. ….
What happened to that then? Still I say the other side conceded so we won!

Time for some grub and the introduction of drinking games… Must say it was a bit alarming having Jared behind me in the car on the way home. Made it home without incident thank goodness. Thanks Jed ;-).

Below is a direct link to our photos. I would have provided the links for this report’s pictures but they have gonefor approval first. I have decided on a top ten of shots given that I post so many but there is still a folder with them all in should you feel like a wade through them. There might even be a video it I can get it loaded.

UPDATE - Opened a can or worms here so have pulled the video and pictures of post match activities. Also I will not be posting picture links with the match reports so you will need to search for these by using the search link attached.