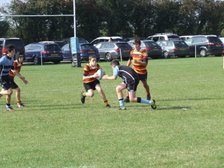 Under 14’s victorious at Witney

A fine and glorious day saw a determined Bicester heading off to Witney for a eagerly awaited return match.

A fine and glorious day saw a determined Bicester heading off to Witney for a eagerly awaited return match.

Witney succumbed to the early pressure from Bicester by making an early mistake which resulted in a knock on. Jack Williams played the advantage by picking up the ball just outside the 22 and then offloaded to Jacob Hypolite who ran it in between the posts for Bicester’s first try.

Moments later Bicester returned the favour to Witney by knocking the ball on which resulted in a scrum which Witney capitalised on to score their first try. No conversion.

Witney then came back strong scoring 3 try’s on the bounce but no conversions. This ended the second quarter with the score 20-29 to Bicester.

The third quarter was a lot slower with both teams contesting for the ball which resulted in good defensive work by both teams. The stalemate was broken by Niall Guinan picking up the ball from the back of a scrum on the 5m line and scoring a very well executed try. Witney fought back and scored an excellent try just before the whistle, ending the third quarter 25-34.

Bicester started again very strong in the final quarter. Several minutes in saw the ball being kicked by a recovering Witney to the hands of Reece Sullivan who made a fantastic run, flanked by Liam Walker, who received the pass and ran in for his second try of the day.

Bicester fighting hard were in scoring range again, this time the mantle was taken up by Archie Devlin, Team Captain, who with a nice timed run placed the ball behind the line for another try to Bicester.

With moments to go Bicester on the 5m line tried several times to score only to be held off by a very determined Witney but with Bicester keeping on the pressure, Jamie Smith powered through the line and with immense determination finished off the day by scoring his first try for the club which ended the score 25-49 to Bicester.

A fantastic game of rugby which saw a lot of players getting their first try's for the club. Great teamwork by all and thank you to Witney for a great match.

Bicester’s man of the match was Liam Walker.

Final comment of the day – Just like to say how fetching the referee looked in his new shirt!