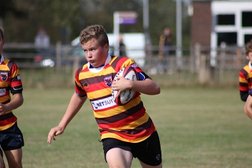 Bicester headed out to Wheatley on a hot and glorious sunny day.

From the off Bicester showed their dominance with a well timed run in the opening minutes, with Liam Walker running down the left hand wing with a superbly timed pass from Robert Helyer, to continue his try scoring run.

An unfortunate knock on gave Wheatley the advantage of a scrum. Bicester quickly turned this over with a pick up from Chris Cossey who ran it home for a try. A well placed kick from Reece Sullivan secured a conversion. Wheatley put Bicester under pressure with several minutes of attacking play but great defence from Bicester held off a determined Wheatley team. Callum Kipp ended the first third with a great try, his first for the club. This gave Bicester a 0-17 lead.

The second third again started very strong for Bicester with Niall Guinan scoring a try, coming off the back of a great run from Ryan Faulkner who ran from his own 22 to Wheatley's 22, handing off several players in the process. Reece Sullivan successfully scored the conversion. Bicester's newest player Frazer Cruickshank in only his second game then crashed through Wheatley's defence to score two tries back to back, with both tries successfully converted by Reece to end the second third with a score of 0-38 to Bicester .

The final third started with Liam Walker scoring a well setup try from great movement of the ball through the backs. Successfully converted by Reece. Wheatley showed great strength and never gave up but came back with a big push which saw them scoring a try under the posts with a phenomenal run by their number 15. An extra two points from the conversion put Wheatley on the scoreboard. Bicester bounced back with a try from Reece Sullivan that came from a great offload from Frazer. Reece added another two points to his tally by converting the kick. Not a minute to rest saw Wheatley on the attack again with a great series of passes and runs to score their second try of the game. Bicester then returned the compliment with another great try by Niall and a final conversion from Reece ending the game with Bicester winning 12-59.

Great game of rugby by both teams and the score line did not reflect the passion and determination shown by Wheatley who made us feel very welcome. An outstanding performance from Bicester yet again with Frazer being Bicester's Man of the Match.