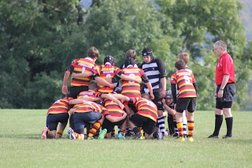 Bicester travelled to Stow with the anticipation of it being one of the toughest games of the Season.

Stow started off well putting 5 points on the scoreboard within the first few minutes. Bicester now on the back foot and with some great attacking play allowed Jim Moir to score a try which was successfully converted by Reece Sullivan.

Moments later Liam Walker with a phenomenal solo run, started at the half way line and powered through several Stow players to place the ball in between the posts. An awesome try with another successful kick by Reece Sullivan took the score to 5-14 at the end of the first 20 minutes.

The second third saw some great defensive work from both teams resulting in no tries scored for either team.

In the last 20 minutes with both teams fighting hard for the ball, tensions ran high and an incident off the ball saw a Bicester player being red carded. With Bicester now down to 14 players, Bicester held their line and with a great run from Harrison Baker who off loaded the ball to George Zverko who then ran it in and ‘Swan Dived’ the ball between the posts for a try. Reece Sullivan converted the kick bringing the score to 5-21.

In the closing minutes of the game Team Captain Archie Devlin scored a try to finish the game at 5-26 to Bicester.

New player Connor Page was named Man of the Match. Great game of rugby with brilliant teamwork, a well-deserved result . Well done boys, 4 out of 4.