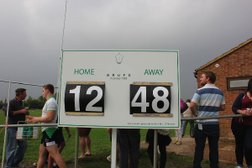 Try-mendous start to the season!

The game started off very even between both teams. Ten minutes into the game Chris Cossey scored a great try which was converted by Reece Sullivan. Buckingham bounced back with their first try and conversion and evened the score with a great run from the halfway line.

At the start of the second third Niall Guinan scored his first try of the season under the posts, with Reece kicking a successful conversion. Bucks then scored their second try but failed to convert the kick. Niall ended the Second third by scoring his second try bringing the score 12-19 at the whistle.

Start of the 3rd saw a very confident Bicester Team running in several more try's. The first from Nial completing his hat-trick, Chris Cossey from scrum on the line and then Liam Walker and Archie Devlin both making it onto the score sheet with well timed runs. Final try of the game was scored by Jacob Hypolite in the last minutes. Reece Sullivan scored two further conversions in the final third, with the last conversion being the best of the day, with the final score being 12-48.

It was a great team effort played with good spirit. Exciting times ahead for our Under 14’s, it’s going to be a great season - well done boys!!!