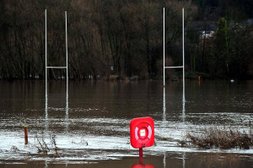 We travelled to Chinnor as the Bicester pitches were deemed unplayable due to the weather to find a morning of mud, rain and a biting wind. It is credit to both sides that what ensued was a real game of hard rugby where both teams kept going to the end even though some people lost the use of their limbs!

The first half saw Chinnor with the wind at their backs and they made good use with some clever kicks to the corners. From a lineout Chinnor caught and drove making good yards to force their way over 5 – 0. Bicester were competing putting some big hits in defence to keep the larger Chinnor pack at bay until a loose ball was picked up and Chinnor charged over 10 - 0. Bicester had their moments and forced their way up into the Chinnor 22 where the final ball was knocked on allowing Chinnor to clear with another long kick. Chinnor again managed to win the lineout and drive over the line 15 - 0 and this is how it stayed until the end of the half.

The second half had Chinnor now against the wind and they changed their tactics to a forward drive picking and going at each ruck, but the Bicester defence was solid around the fringes not allowing anyone through. The Bicester scrum was under pressure from the larger Chinnor pack making any clean ball difficult to get away but Bicester held on and tackled everything that came at them. Finally Chinnor found a way through and scored in the corner 20 – 0. That could have been it and Bicester could have buckled but to their credit they went back at Chinnor and forced their way down the pitch where again some good play saw Dan B on the end of a move to go over for a score 20 – 5. Now the weather began to take its toll and two players had to go off with extreme cold, and with the final play of the game Chinnor went over from a scrum to score 27 – 5.

The conditions were not designed for an open game but both teams put on a good display and should be applauded for their commitment, handling was good and there have been more dropped balls on a dry day. A much better performance from Bicester with the Christmas cobwebs well and truly blown away, just hoping that everyone is now warm and dry. Squad of Harrison, Garin, Ed, Alan, Tom, Ashley, Adam, Dan B, Cameron, Jack (not a nice day for a debut), Christian, Ieuan, Lewis, Louis, Aaron, Rhys, Mark, Dan W and James.