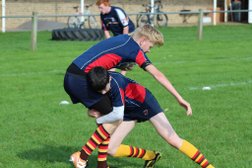 Bicester travelled to Buckingham for a game in perfect conditions with the sun on their backs, soft underfoot and no wind

From the off the larger Buckingham pack started putting pressure on Bicester and forced them back into their 22. A number of blind sides moves finally resulted in Buckingham going over for the first score 0 – 5. Bicester came back but again were forced into their 22 where they soaked up the pressure with excellent defence until they started to see a bit of ball and worked their way down into the Buckingham half. From a scrum a set play in the backs opened up the overlap for Lewis to beat his man and run through to score with Christian converting 7 – 5. Bicester were competing well at the breakdown but could not quite get their hands on enough ball and Buckingham found a way down the blindside to score out wide 7 – 10. The game was then marred by a melee of players and the referee called for half time and sent both teams into the changing rooms to cool down.

Credit goes to both teams who returned for the second half and concentrated on playing rugby with no further issues occurring. Bicester came out the better and started putting pressure on Buckingham who had to escape through a number of relieving kicks. Finally the pressure told and Buckingham gave away a penalty in front of the posts which Christian slotted over to equal the scores 10 – 10. The game continued with both sides utilising their kickers to play for field position. A couple of times Bicester could have gone over only for the ball to be knocked on or passed forward and were looking the more likely to score. Another long kick for field position and Buckingham gained a scrum on the Bicester 5 metre line. The scrum was wheeled giving the Buckingham No.8 ample opportunity to pick up and go over unopposed 10 – 15. The game was coming to an end and the weary Bicester legs who had been so good at their cover defence were just not able to stop a good Buckingham line break to go over for the final score 10 – 22.

Bicesters first up defence was excellent not allowing the big Buckingham runners any space to work in. Handling in the backs was solid and yet another try from a set move. Well played to the squad of Ed, Oscar, Garin, Adam, Dan B, Harrison, Alan, Tom, Ashley, Cameron, Christian, Dan W, Lewis, Rhys, Mark, James, Louis, Sam, Jimmy and Alex.